Friends
About Activities Rooms Facilities Prices Other nearby hotels 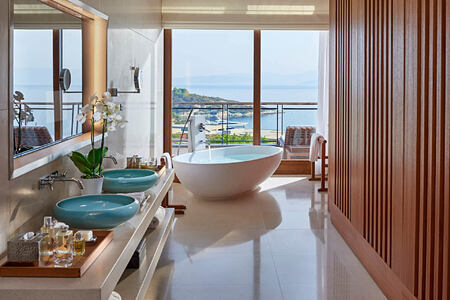 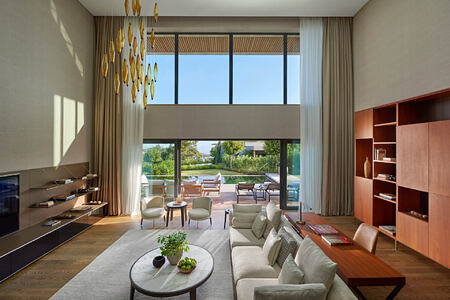 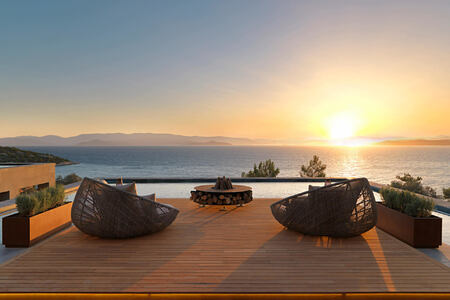 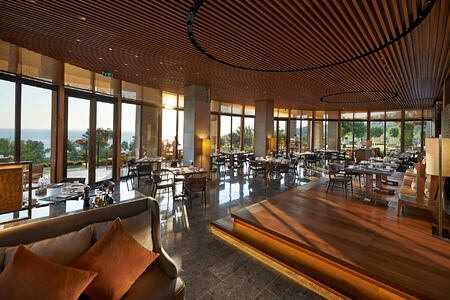 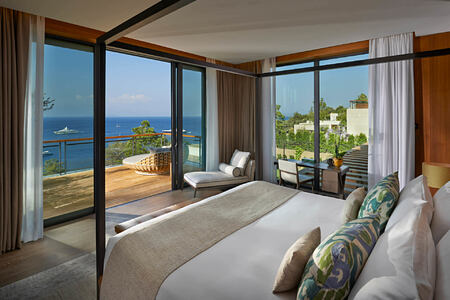 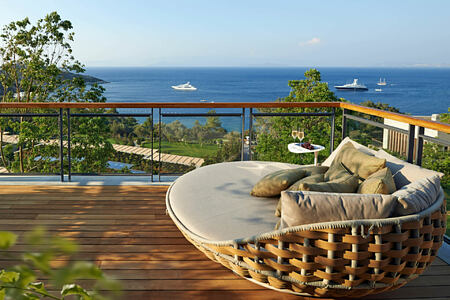 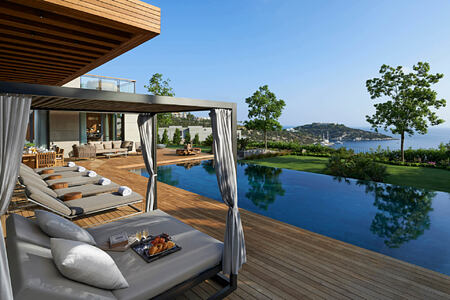 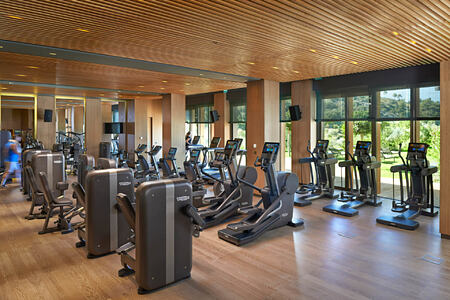 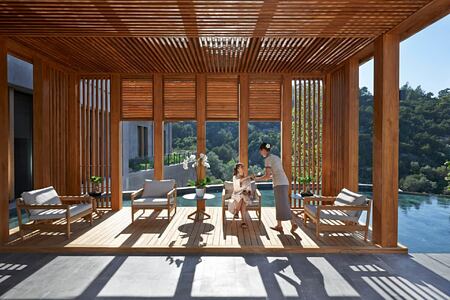 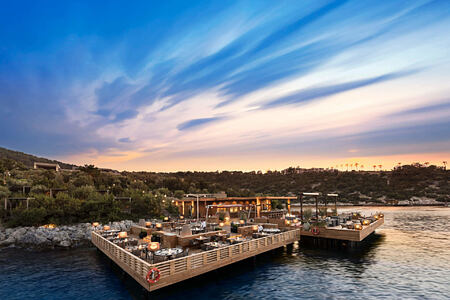 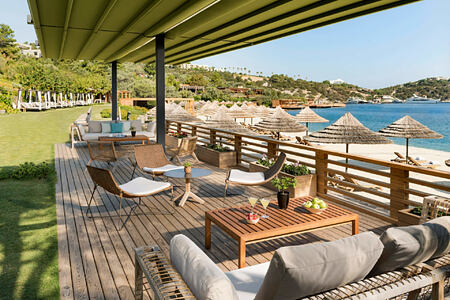 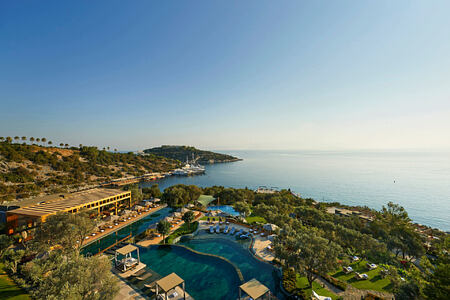 Wrapped around its own private bay on the northern shores of a rugged peninsula jutting-out from Turkey’s beautiful Aegean coast, it’s hard to imagine a more laid-back yet sophisticated and exclusive retreat than the Mandarin Oriental.

Spread across almost 15,000 acres, this is a world within a world, about as exclusive a getaway as you can imagine, making it entirely appropriate that the hotel is situated on a stretch of shore known locally as Cennet Koyu – Paradise Bay.

Discounting the passing of the occasional yacht or cruiser belonging to Turkey’s wealthy elite, who have made Bodrum and its environs their very own French Riviera, once you enter the grounds of the resort there’s nothing to remind you of the outside world.

Daytime activities revolve around the twin beaches and crystal clear waters fronting them, or relaxing by one of four swimming pools (one dedicated to families). The beautifully designed spa and wellness area offers specialist oriental treatments as well as sauna and Turkish bath experiences, and includes a 26m indoor lap-pool as well as a gym crammed with the very latest exercise machines.  Yoga and Pilates fans will also find what they’re looking for.  Including Yogalates.

In the evening, you can enjoy fine-dining on Turkish, Italian or Japanese cuisine at one of the a la carte beach-front restaurants, then sipping cocktails and listening to mellow sounds at low-key beach-bars run by Istanbul’s leading club, Babylon.

What’s really special about this place, though, is that the size of the grounds compared to the number of guests is so generous, and that the low-rise hotel buildings have been subtly designed to blend perfectly into the olive groves amongst which they have been built. At times it’s hard to remember that you are in a holiday complex at all, especially when all you can hear is the incessant creaking of the cicadas.

The resort is also perfect for kids. Olive beach slopes gently into the sea, there’s a children’s pool with some great play equipment next to it, a supervised playroom for toddlers and games room for older kids inside the main building, and babysitting services.

This is a fabulously luxurious and sophisticated place to stay, and perfect for a relaxing break in the sunshine.  But if you want to be active and stay in shape, there’s lots on offer, including:

Restrained elegance is the key to the 86 rooms and 23 apartments. The Mandarin’s oriental roots show in the emphasis on simple lines, wooden wall panelling and floors, sleek furniture and off-white rugs, not to mention the potted orchids. A welcome feature is a sizeable veranda for lounging out front. The stylishly long, narrow bathrooms have under-floor heated marble floors and large freestanding oval baths from which, in sea-view rooms, you can relax and gaze out over the Aegean.

Sharing Prices
Low season from £1690
High season from £4270
Price per person based on 2 sharing a Sea View Room for a 7 night stay, including breakfast. Flights and transfers available at an additional cost.
Prices are shown as a guide only and may differ depending on any new special offers, currency movements and availability. Contact us for your tailor-made quote. 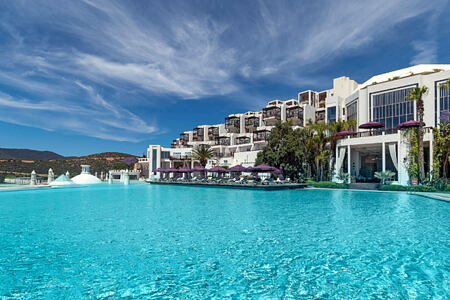 A luxurious hotel perched on a cliff top in a secluded location (approx 15 minutes drive from Bodrum) and just a short walk down to... 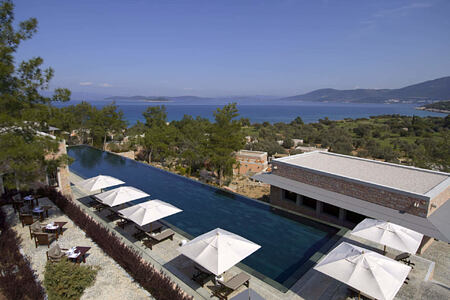 Amanruya is a fabulous, luxurious all-season resort offering superb accommodation on the beautiful northern coast of the Bodrum Peninsula. The sea views are spectacular. Amanruya is... 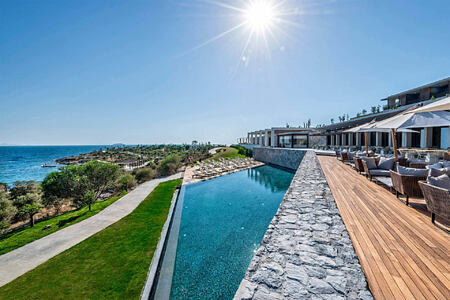 Senses Kaplankaya is nestled in the breathtaking natural beauty of the South Aegean coast of Turkey, near Bodrum, offering an extensive range of health and... 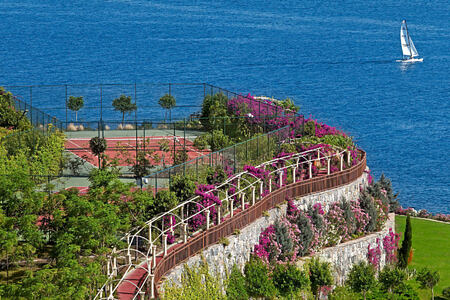 It's difficult to imagine a more picturesque spot for a game of tennis than the courts at Sianji, shown above. Sianji Wellbeing Resort has two floodlit courts... 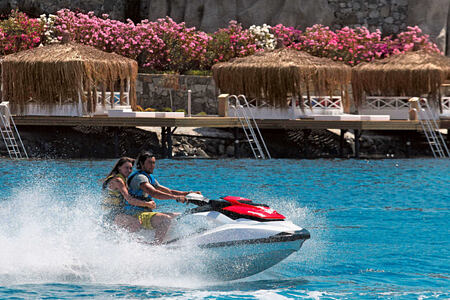 With gorgeous warm turquoise waters, the private beaches at all of our featured resorts offer an abundance of watersports activities. The coastline around Bodrum is spectacular,... 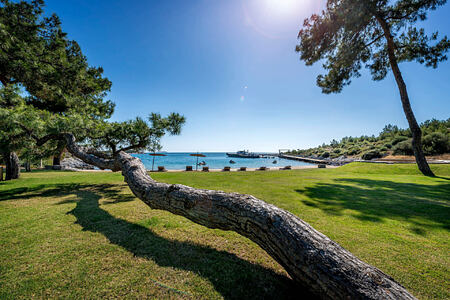 For growing numbers of people, a holiday just wouldn't be a proper holiday without the chance to enjoy and benefit from regular yoga classes. Whether you... 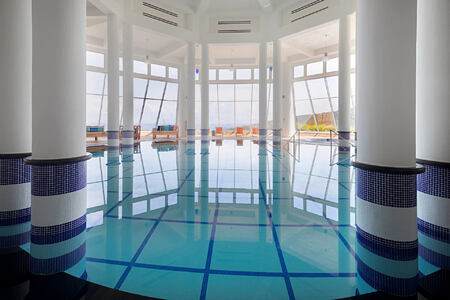 At all our featured resorts here, you can be sure of a wonderful spa experience. For those on a fairly limited budget, Sianji Wellbeing Resort is a great... 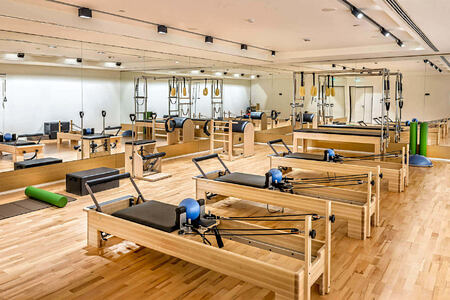 It's very welcome but rather surprising that two of our featured destinations in Bodrum have a fully equipped Pilates studio... Sianji Wellbeing Resort has a machine... 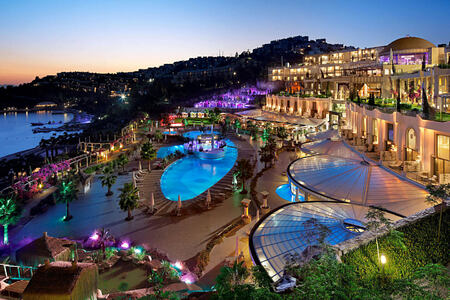 Sianji Wellbeing Resort is a new addition to the holiday destinations on Turkey's beautiful south coast, and the only one offering juice and raw food...

For an exceptional family holiday near Bodrum, on Turkey's gorgeous south coast, we recommend Six Senses Kaplankaya. We also love Sianji Wellbeing Resort, which is... 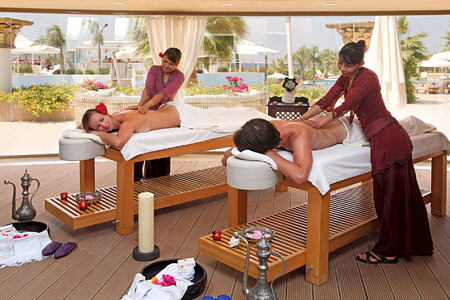 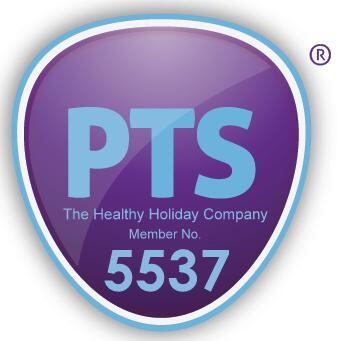